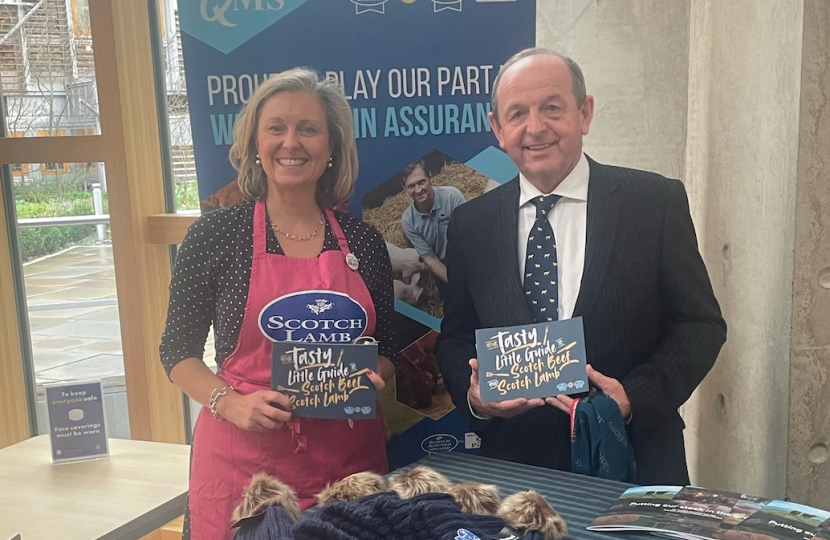 Rachael Hamilton MSP has said the SNP must go “further and faster” in promoting the benefits of Scotch lamb to consumers across Scotland.

Mrs Hamilton took part in a Members Business debate in Parliament on the Lamb for St Andrews Day campaign.

In her contribution, she marked the achievements of George Purves of United Auctions, who was influential in bringing lamb to school home economics classes in Selkirk, Hawick and Galashiels schools.

She also mentioned local farmers, including Blackface Breeders’ Association President Alec Telfer from Broadmeadows, Yarrowford, and the McClymonts at Tinnis, for their work to promote the sheep industry.

Mrs Hamilton also took the opportunity to call on the SNP Government to ensure that they heed this campaign led by Quality Meat Scotland to boost the sales of lamb as part of people’s weekly food shop across Scotland.

She says that can not only support our hardworking farmers, but also help to tackle climate change as consumers purchase Scotch lamb made right here in communities in Borders, rather than from abroad.

“I was delighted to take part in this debate and want to thank QMS in particular for their work in bringing it to the Scottish Parliament.

“Scotch lamb is one of our most iconic products but the sad reality is that we are not doing enough to promote it. I know from my own region in the Borders we have a whole host of sheep farmers doing exceptional work and I was delighted to recognise them during this debate.

“However, we must see the SNP Government use this timely campaign on St Andrew’s Day to go further and faster in promoting lamb as part of the weekly shop for Scots across the country. Not only will that benefit our hardworking farmers, but it can also help to tackle climate change.

“It is welcome that this campaign has filtered down into our schools. I want young people to know more about where their food comes from and it is vital we educate them on buying locally and eating healthily.

“If we are to bring through future farming talent, then it is vital countryside education plays a key role in our curriculum.

“This debate once again highlighted the need for the SNP to provide urgent clarity to our farmers, including sheep farmers on future farm policy. They have been left in the dark for too long by successive SNP rural ministers.

“They must be given confidence that Scotch lamb will continue to be part of our produce for a long time to come yet.”