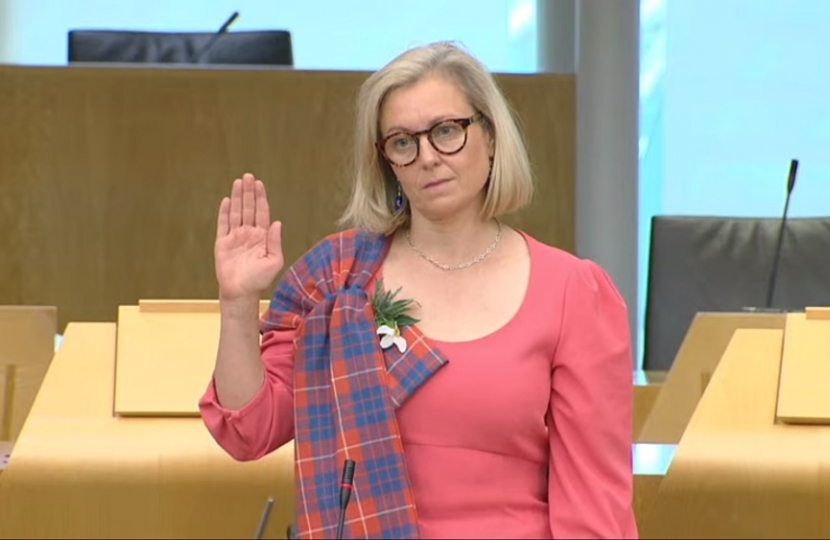 Rachael Hamilton MSP has taken her oath of allegiance in Welsh, on her first day back in the Scottish Parliament.

Last Friday, the Ettrick, Roxburgh and Berwickshire MSP was returned on 18,564 votes, giving her a majority of 6,863 over the SNP’s Paul Wheelhouse, by securing 51.5% of the vote.

Mrs Hamilton was born and attended school in Brecon, Wales and yesterday she was sworn into the new session of the Scottish Parliament, under the following oath in Welsh:

“I, Rachael Hamilton do swear that I will be faithful and bear true allegiance to Her Majesty Queen Elizabeth, her heirs and successors, according to law, so help me God”.

“It was an honour to be sworn into the new session of the Scottish Parliament and to be re-elected to represent the people of Ettrick, Roxburgh and Berwickshire.

“I took my oath of allegiance in Welsh as I was born and educated in Brecon.

“My family still live in the area along the Welsh border, and I have a strong affinity to the area.

“My priority, after my re-election, remains to give 100% of my efforts to the Borders and to stand up for my constituents in Holyrood.

“As we emerge from the Covid pandemic, we must be focussed on recovery, attracting new employment opportunities to the Borders and ensuring we build back better.

“Borderers have placed their trust in me; I shall not let them down”.