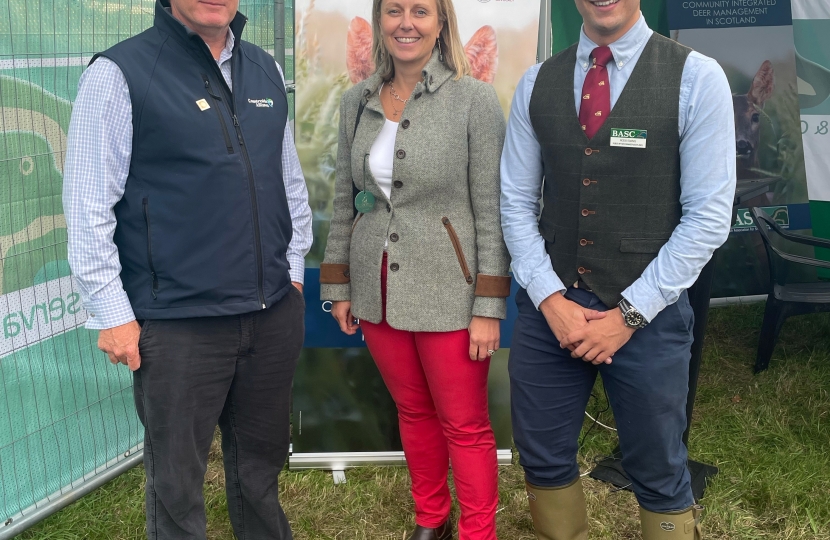 Rachael Hamilton MSP has backed a new vision that will place communities at the centre of efforts to manage deer on publicly owned land in Scotland.

The plan was launched at the GWCT Game Fair at Scone, by a partnership of eleven leading deer management stakeholders.

The British Association for Shooting and Conservation (BASC), the co-ordinating partner behind the vision, has pledged to support the syndicate, act as the liaison with FLS and develop replicable operating mechanisms so that other schemes can be established in the future.

The partnership aims to institutionalise what is being described as ‘community integrated deer management’ by establishing more opportunities for trained recreational deer stalkers to manage deer on publicly owned land in their local area.

The organisations argue that current public expenditure on deer management contractors is ‘needlessly expensive’, and that utilising trained recreational deer stalkers would slash costs if they were afforded a more enhanced role in their local area. In 2019, Forestry and Land Scotland (FLS) – which manages approximately 9% of Scotland’s land area – expended £10.5 million on deer management contracts and just under £5 million on fencing.

The partnership is urging the Scottish Government to establish a pilot community deer stalking scheme on FLS land, in which a local recreational deer stalking syndicate would pay a small fee to take on the deer management obligations.

In addition, BASC and the British Deer Society (BDS), who both deliver deer management qualifications, have pledged to provide discounted training courses to recreational deer stalkers with ambitions of managing deer in their local area, in a bid to upskill communities and make deer stalking more accessible.

The partnership is also recommending that the Scottish Government establish a £250,000 deer management training fund.

Mrs Hamilton welcomed the plans and believes the Scottish Government must consider the report in full, given the range of policies which will boost rural communities and benefit effective deer management.

“The scale at which licences to cull deer at night and out of season are relied upon is deeply concerning, and there are tangible concerns for deer welfare that surround such practices.

“It is categorically unacceptable for the Scottish Government to now be considering abolishing some of the longstanding provisions that protect deer welfare.

“The benefits of integrating communities into the effort to manage deer are clear and irrefutable. Scotland’s complement of trained recreational deer stalkers constitute a valuable, under-utilised workforce that is ready and willing to play a more meaningful role.

“This could be revolutionary for the Borders, and it puts rural communities at the heart of deer management.

“The Scottish Conservatives wholeheartedly support the proposals put forward by this new partnership to achieve this.”

“Deer management is a fundamental and legal obligation, and where possible we must find more economic, sustainable and localised means of controlling Scotland’s deer – particularly on publicly owned land, where opportunities are often out of reach for recreational deer stalkers.

“Community integrated deer management will effectively capitalise on our rich, growing and free resource of trained recreational deer stalkers. Failure to provide these part-time deer managers with the opportunity to manage deer locally would be nonsensical, especially in the context of Scotland’s ambitious forestry targets that are inextricably linked with tackling the climate emergency.

“The benefits of community integration are numerous, and the foundations of this vision are highly sustainable. It will build resilience into the management framework; it will enable a sustainable food source to be harvested, processed and consumed locally; it will effectively and flexibly protect the environment; it will improve economic productivity; and it will enhance community knowledge of deer impacts and benefits.

“This partnership’s commitment to integrating and upskilling communities is resolute. We would like to see the Scottish Government match this commitment by establishing a pilot community deer stalking scheme on public land without delay, and also create a deer management training fund to help us train the next generation of deer managers.”

“Deer undoubtedly pose significant environmental challenges, but they are also an iconic natural resource and should be managed respectfully. Community integrated deer management provides an obvious, realistic and sustainable means of achieving this.”