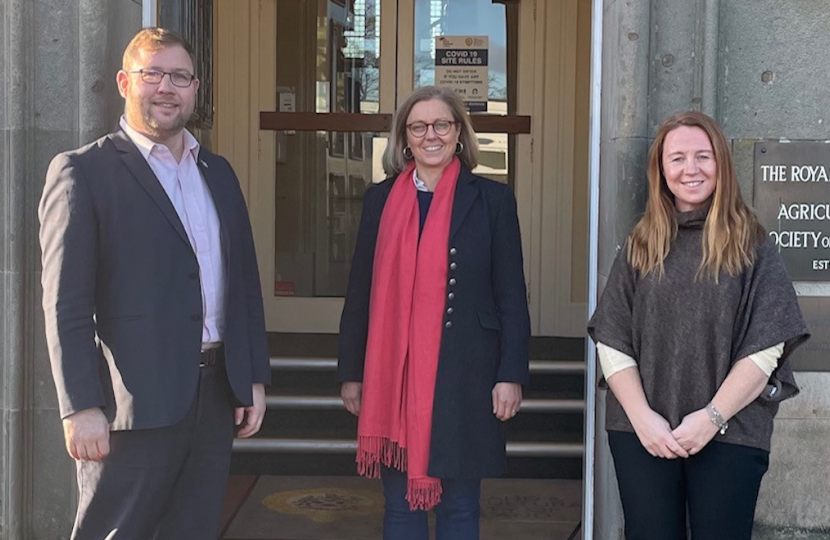 Food and farming production were at the heart of the discussions at the meeting, with the need to promote Scottish produce, and show that our livestock and dairy industries have a low carbon footprint due to carbon sequestration through grassland

Katrina Barclay from RHET, then expanded on their work to promote countryside education, a campaign Rachael Hamilton has been passionate about since her election.

They discussed the vital role that RHET plays teaching children about the importance of food, eating healthily and understanding that buying Scottish produce reduces food miles.

On the tour of the showground and the new Members’ Pavilion, Mr Laidlaw spoke of the plans for the 200th anniversary of the Royal Highland Show and showed Mrs Hamilton how the showground had been used in the response to Covid, with the vaccination centre in the Lowland Hall.

Mrs Hamilton thanked the pair for the visit and said it highlighted the importance of the ongoing contribution of the Royal Highland and Agricultural Society and RHET throughout the pandemic.

“It was tremendous to visit Ingliston and to hear from Alan and Katrina about the exciting plans for the 200th anniversary next year.

“Farmers have missed out on the Highland Show now for two years, but it will be back bigger and better next year, showcasing the very best of Scottish agriculture.

“I have always been a big supporter of the Show and believe it is a powerful tool in educating people about food, farming and the role Scottish agriculture has in narrowing the net zero gap.

“Our meeting on Friday focused on how we promote Scottish produce as not only as a fine product, but also an environmentally and carbon sensitive product.

“Farmers need more clarity and support of the SNP Government going forward if we are to achieve net zero.

“I want to put on record my thanks again to both Alan and Katrina, and I look forward to attending the Royal Highland Show, along with many Borderers, next year”.