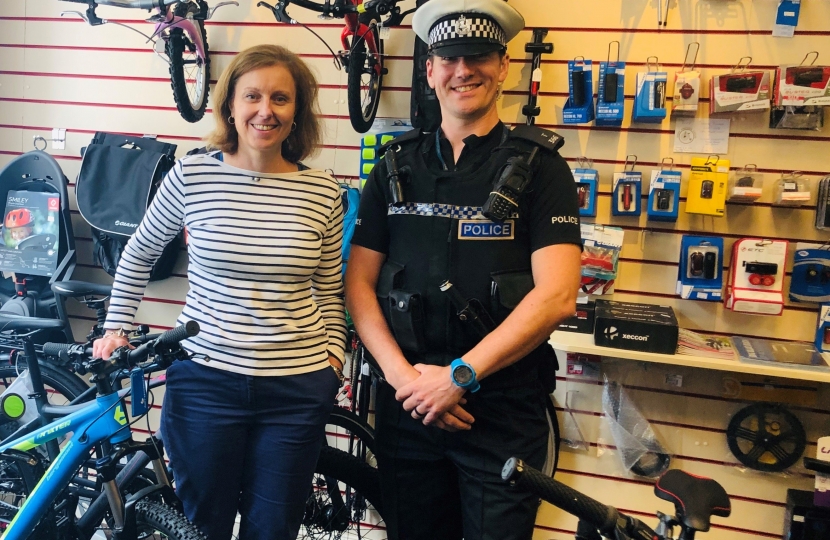 Rachael Hamilton MSP met with Police Officer David Waddell, Operation Close Pass Local Area Co-ordinator, to hear more about how the operation is designed to educate drivers who pass too closely to cyclists.

Operation Close Pass was originally launched by West Midlands Police in 2016, and was designed to proactively identify drivers who drive too close to cyclists.

Plain-clothed Police Scotland officers take to the roads on bicycles, and when a ‘near-miss’ takes place, the officer radios ahead to their colleagues to intercept the driver.

The operation follows a survey that revealed that 73 per cent of drivers are unaware that passing too close to cyclists is an offence that is punishable by three points on a driver's license, and a £100 fine.

Rule 163 of the Highway Code states that when passing cyclists, drivers should give "as much room as you would when overtaking a car". Cycling UK is calling for the code to include guidance on a minimum distance to give when overtaking, suggesting a minimum of 1.5m.

Ms Hamilton believes that it is incumbent upon all motorists to drive responsibly and give cyclists the necessary space when on the road.

"Hearing from Officer David Waddell about the dangers associated with passing cyclists too closely really highlighted how important an operation this is.

“On rural roads in particular, cycling can be challenging, so there is an even greater need for motorists to be vigilant and given enough space when passing.

“Educating drivers of overtaking cyclists responsibly is the key to the success of this operation.

“If we can change driver behaviour, then the roads will be safer for all users”.