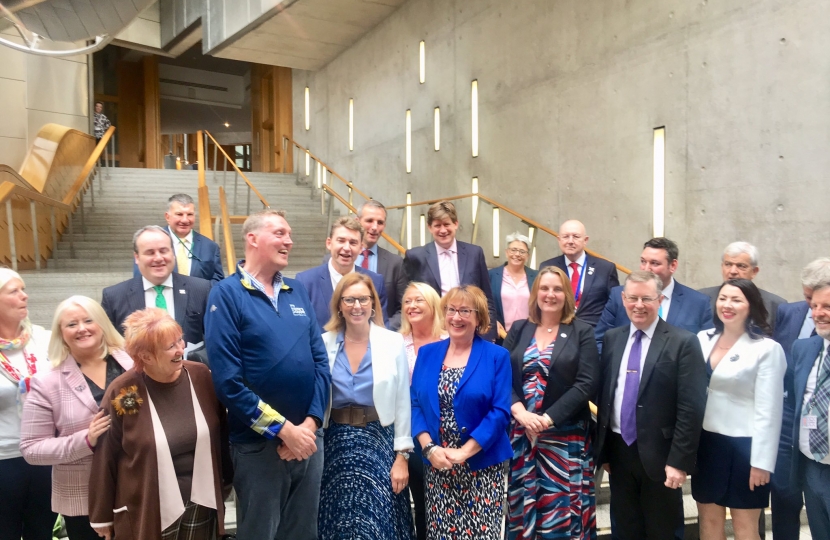 A joint campaign between Rachael Hamilton MSP and Doddie Weir OBE has been hailed a success after the Scottish Government will revise the code of practice for Blue Badge scheme criteria.

Rachael Hamilton joined forces with Doddie Weir, Scotland rugby legend and founder of the My Name’5 Doddie Foundation to call on the Scottish Government to grant people living with motor neuron disease (MND) automatic access to a Blue Badge.

The issue of Blue Badge applications first started when a Borders constituent got in touch with Rachael Hamilton expressing their frustration with the process.

Waiting times associated with the processing of Blue Badge applications varies and currently it takes on average around 12 weeks. Feedback from MND Scotland’s advisers has highlighted that it can take up to 2 months. Currently there is no cure or effective treatment for MND, and the average life expectancy after diagnosis is sadly 18 months. As motor neuron disease can result in a person’s condition deteriorating rapidly, Ms Hamilton believed the only solution is to grant automatic access to a Blue Badge at the point of diagnosis.

It is estimated that around 230,000 people in Scotland hold a blue badge, allowing them to park on roads without charge and normally without time limit. Around 75% of blue badge holders say they would go out less often if they didn’t have one.

Paul Wheelhouse MSP, Minister for Energy, Connectivity and the Islands agreed to ‘revise and refresh’ the current code of practice in partnership with key organisations, such as MND Scotland. This will allow for a prescription type of approach, which will mean an MND care team can automatically grant a Blue Badge.

Ms Hamilton was delighted that the Scottish Government took the aims of her campaign on board and would like to thank Doddie Weir OBE, MND Scotland, the Scotsman and my constituents for their continuing support in her campaign.

“This is a victory for common sense first and foremost; people living with MND should have automatic access to a Blue Badge so that they can maintain their independence and dignity.

“I must congratulate Doddie Weir on his remarkable achievements to date. The positivity and tenacity that Doddie has displayed throughout the years, in exceptionally difficult circumstances, is a formidable example to us all.

“I welcome the Scottish Government’s commitment to revise the code of practice, and I hope that we see the changes made in a timely manner so that no more people with MND have to go through the length and stressful process of obtaining a Blue Badge”.

“Motor neuron disease is unpredictable. It can be fiercely aggressive and a third of those who receive this terrible diagnosis die within a year, more than a half within two years of receiving this devastating news.”

“I have been determined to maintain a level of independence and I want to be out and about, seeing my sons play rugby at weekends, helping with the work of My Name’5 Doddie Foundation and living my life to the full. But as time goes on, like fellow sufferers of MND, this becomes more difficult. Not everyone has six months to wait for the blue badge system to kick in.”

“Fortunately there are not too many of us in this exclusive club but I believe everyone who is diagnosed with motor neuron disease should automatically be entitled to a blue badge, this will enable families to live a dignified and as full a life as possible while coping with this terrible disease.”