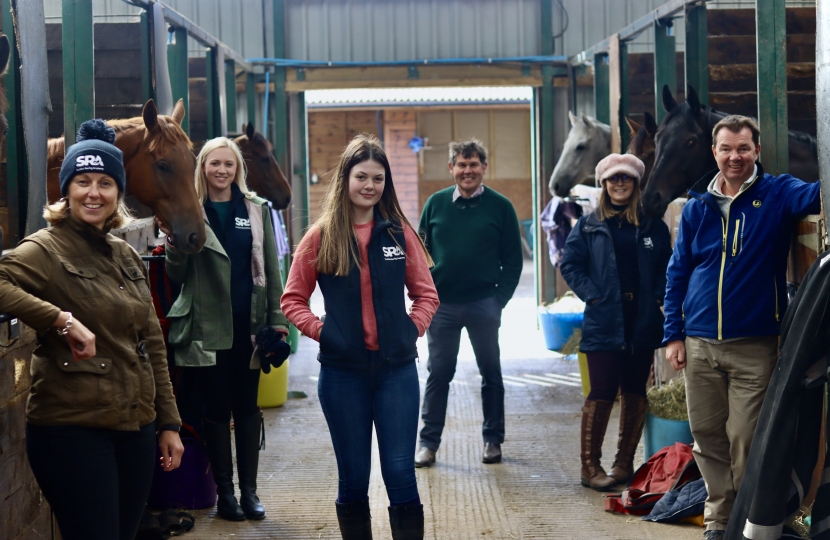 Mrs Hamilton and Mr Opperman joined the Duke of Roxburghe and Ben Walker of Scottish Renewables to hear the benefits of renewable energy provided by the estate’s biomass boiler, which operates a woodchipping and drying operation at Bowmont Forest.

It was then onto Sandy Thompson’s yard at Lambden Farm, Berwickshire. Over the past 6 seasons Sandy and his team have gone from winning homebred point to pointers to winners at the Grade 2 Dipper Chase at Cheltenham, two Grade 2 Rendelsham Hurdles, the last 4 runnings of the Borders National, the Edinburgh National and the Listed Totepool Chase.

Mr Opperman and Mrs Hamilton were met by Sandy Thompson and Rachael McCauley, a student apprentice at the stables. The British Racing Academy works in tandem with the stables and across Scotland, over 50 apprenticeships are provided in horseracing. Horse racing is Scotland's second most attended sport annually, supporting 3400 full-time equivalent jobs and generating over £300 million.

Mrs Hamilton believed the visits showcased the vibrancy and diversity of the Borders economy, as well as the skills and training opportunities offered through apprenticeships and new renewable ventures.

“It was fantastic to show Guy Opperman MP around our beautiful constituency of Ettrick, Roxburgh and Berwickshire

“From apprenticeships, training young people, to the next generation of renewable sources of energy, the Borders has a lot to offer.

“It was fantastic to introduce Mr Opperman to constituents who are harnessing the power of our local landscape in an environmentally friendly way.

“The Racing Academy is doing fantastic work and contributing to a leading sector in Scotland’s sports industry.

“Even with the economic backdrop of Covid-19 looking gloomy, there are positive and encouraging signs that the Borders is still thriving and recovering”.

“It was fantastic to visit the Borders with Rachael last week and see just how much the Borders has to offer the UK economy.”

''As Pensions Minister, it was excellent to see the innovative renewable technologies at Floors Castle. The new Environmental, Social and Governance regulations that kick in next month will require all pension schemes to report publicly on how they take account of climate change, as transparency is key to change.

“We want to see pension funds investing ethically and sustainably in projects like this for the future.

“It was also great to visit Sandy Thompson's yard. The Scottish Racing Academy is doing brilliant work to provide apprenticeships for young people like Rachael in racing''.