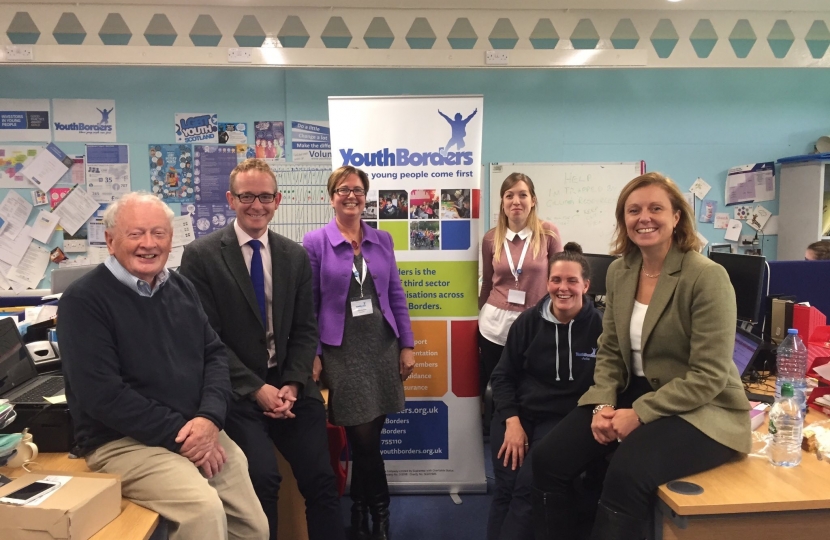 Rachael Hamilton MSP and John Lamont MP met the team at YouthBorders to congratulate them on achieving the Gold Award for Investors in Young People and hear about the great work they have done for young people, across the Scottish Borders.

In receiving this accolade they become the first organisation in the Scottish Borders to be given its highest award, and only the twelfth in Scotland.

To recognise this great achievement Rachael Hamilton MSP lodged a motion in the Scottish Parliament congratulating them on their award and the work that they do.

The two politicians met with them to discuss their plans for the future and talk about their many current projects.

Rachael Hamilton MSP (Ettrick, Roxburgh & Berwickshire) said: “It was great to meet Clare De Bolle and her team at YouthBorders to hear about the great work that they do for young people and about their plans for the future.”

“In recognition of their Gold Investors in Young People Award I lodged a motion in the Scottish Parliament which has received the support of many MSPs who know the vital work of youth groups in our society.”

John Lamont MP (Berwickshire, Roxburgh & Selkirk) said: “I really enjoyed listening to the wide range of work that YouthBorders help facilitate in my constituency. Their dedication and commitment to the welfare of children of all ages from across the Borders is clear.”

“To be the first organisation in the Scottish Borders and only the twelfth in Scotland to receive this recognition shows the impact they are having on young people in the Borders.”