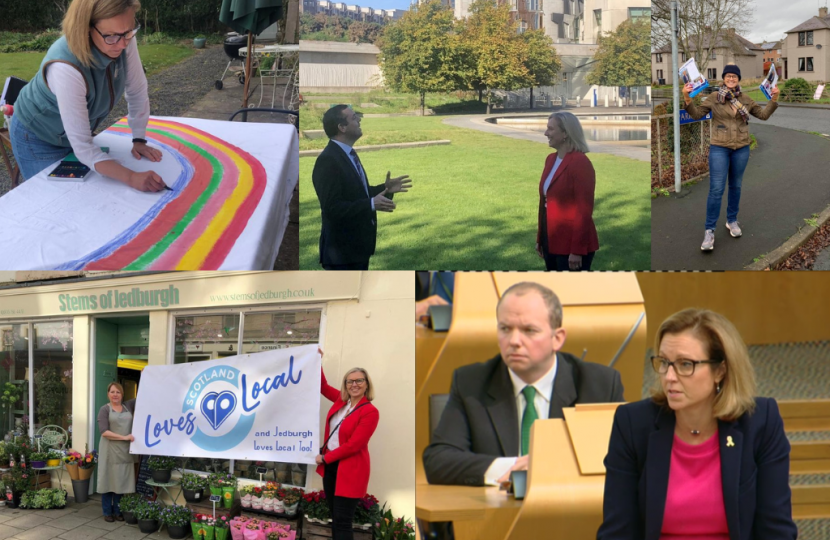 Please find below my stance on some of the key issues constituents' regularly raise...

The previous legislation that has regulated hunting with dogs, the Protection of Wild Mammals (Scotland) Act 2002 has been an effective piece of legislation making it an offence for a person to deliberately hunt a wild mammal with a dog, and for landowners or dog owners to knowingly allow this to occur. Where the Act permits dogs to be used to flush out foxes to guns for pest control, there are rigorous requirements for their swift dispatch.

We will engage constructively with the legislation that has been brought forward.

The UK Government never opposed the principles of the United Nations Convention on the Rights of the Child (UNCRC) Bill. This was falsely claimed by the SNP to be used for political gain and manufacture anti-UK Government grievances.

This is a Bill that the Scottish Conservatives support and voted for in the Scottish Parliament. The UK Government were also clear that they support this Bill and are deeply committed to protecting children’s rights.

The Supreme Court has now ruled that several aspects of this Bill were outside of the competence of the Scottish Parliament, and the judgement was clear that the SNP Government knowingly exceeded this competence when creating the Bill.

The UK Government had been in communication with the SNP Government throughout the passage of this Bill to try and seek resolution on elements that are at odds with the devolution settlement. However, the SNP refused to find constructive agreement on how to avoid these issues.

John Swinney has since stated that the supreme court’s decision proved the limits of devolution, fuelling suspicion that the SNP set the Bill up to fail as a political stunt. Yet again, the SNP has prioritised Scottish independence, cynically using Bill which is mean to protect children’s rights in order to play political games.

The Scottish Conservatives have always supported the principles behind this important children’s rights Bill. The onus is now on the SNP to lay out a firm timescale to bring this legislation back to the Scottish Parliament as soon as possible.

Criminal gangs are smuggling people into the UK, resulting in loss of life, unsustainable pressures on public services, vast costs to the UK taxpayer, and inhibiting our capacity to support the most vulnerable with safe and legal routes to the UK. Steps must be taken to combat the serious organised criminals who facilitate illegal migration and exploit people and human misery for profit.

Already, the total number of illegal arrivals this year is in excess of 5,000, with over 600 making the dangerous journey in one day.

The way to stop the deaths we are seeing at sea is to stop the callous trade in people that causes them. That is why the UK Government has negotiated a pilot migration and economic development partnership with Rwanda, which will mean the least at-risk asylum claimants being supported to build a new and prosperous life. The UK Government will provide an initial £120 million in funding to support operations, accommodation and integration, similar to the costs incurred in the UK.

I understand that nobody will be relocated if it would be unsafe, inappropriate or illegal for them to be and that unaccompanied children or those eligible for family reunification will not be relocated. The exact criteria to be used are being withheld in order to avoid people-smuggling gangs trying to target the most vulnerable.

While the exact details have yet to be confirmed, I am supportive of plans to disincentivise dangerous Channel crossings which have tragically led to lives being lost.

I agree that animals are not property but sentient beings and pets are cherished members of families. Therefore stealing one from a loving home is a particularly vicious crime. It is completely right to say that a surge in pet thefts during the pandemic and the links to organised crime have been an under-appreciated side-effect of lockdown.

Although criminal penalties for such offences are a devolved matter, in 2018 several Scottish Conservative MPs came together to support a new Bill addressing this issue specifically and establish a new offence of the theft of a pet, aiming to see the provisions adopted within Scotland via Legislative Consent. Unfortunately this Bill was not able to make progress.   In the Scottish Parliament, Scottish Conservative MSPs have continued to press the issue. In June 2020, for instance, during a debate over the new Animals and Wildlife (Penalties, Protections and Powers) (Scotland) Bill, colleagues argued that a review of the operation of the law should be required to consider including pet theft as a specific offence.

We did achieve some success in that Bill when my colleague, Liam Kerr, was able to insert ‘Finn’s Law’ – which removed the defence of fear for attacks on police dogs and other service animals and made sure attacks on such animals could be punished with up to five years in prison and/or an unlimited fine. For too long, attacks on police dogs were treated similarly to a broken window or other vandalism.

I commit to support a review of the law on pet theft with a few to toughening penalties, and looking at ways to increase the priority given to these sorts of crimes by the police right now.

Overall, I believe issues like animal welfare will be sidetracked by the SNP Government’s continual push for a divisive second independence referendum in the next few years when we are trying to recover from the pandemic.

We want Scotland and the wider United Kingdom to continue to be a welcoming country to all those fleeing oppression and persecution. Importantly, when asylum seekers are forced to flee their own countries, it is vital that the accommodation contracts we have in place sufficiently support them. It is not acceptable that people are living in the dire circumstances which you have set out.

The Scottish Conservatives firmly believe that everyone should have a roof over their head and not be left helpless.

We will make representations to the Home Office to further understand what action has been taken to ensure that asylum seekers in this type of accommodation are being protected and have proper access to food, a clean living space and a safe environment.

I recognise the huge pain and distress caused by eating disorders, such as anorexia, the mental illness which kills more people than any other. Eating disorders primarily affect young people, and often prove to be family tragedies, as well as personal ones, if left untreated. However, with the right treatment, delivered on-time, these tragedies can be avoided, and full recoveries achieved.

We welcomed the review published by the Scottish Government earlier in the year, especially the recognition that urgent support for people with eating disorders was a priority recommendation. The Scottish Conservatives urge the Scottish Government to act on this and improve access to services, ensuring people with eating disorders are seen as soon as possible due to the extreme risks posed by the condition.

Regarding the menu point that you mention, there must a careful balance between enabling people to make healthier food and drink choices whilst not negatively impacting on those with or recovering from an eating disorder.

I understand that arthritis affects a large number of people in Scotland, and is one of the biggest cause of pain and disability in the country. I recognise that living with a long-term condition, such as arthritis, has a significant impact upon a person’s wellbeing and I thank Versus Arthritis for raising awareness of this issue.

The NHS rightly diverted time and resources to tackling COVID-19. However, the halting of services and the dramatic reduction in hospital operations like joint replacement surgery is not without cost and must be reversed as soon as possible.

The Scottish Conservatives will push the SNP Government to return the provision of arthritis care to pre-COVID-19 levels in a safe and effective way, as soon as possible. That is why we proposed a clinician-led, ring-fenced fund with the sole remit of bringing treatment times under control and tackling the backlog within our NHS.

Arthritis hasn’t stopped because of the pandemic and patients must be able to access vital treatment like joint replacement surgery.

The Scottish Conservatives recognise that improvements to the system of gender recognition would be beneficial for trans people. Now that the SNP Government have published their Bill we will constructively scrutinise proposals that may help to make the system and process easier.

However, as drafted, the proposals do not protect women’s rights and they do not offer enough protection for women’s safety. Women have raised legitimate and reasonable concerns about sections of this bill and it is essential that the SNP Government both listens to and addresses those concerns.

Improving the process for transgender people must not come at the expense of women’s rights and safety.

Thank you once again for taking the time to contact me on this issue.