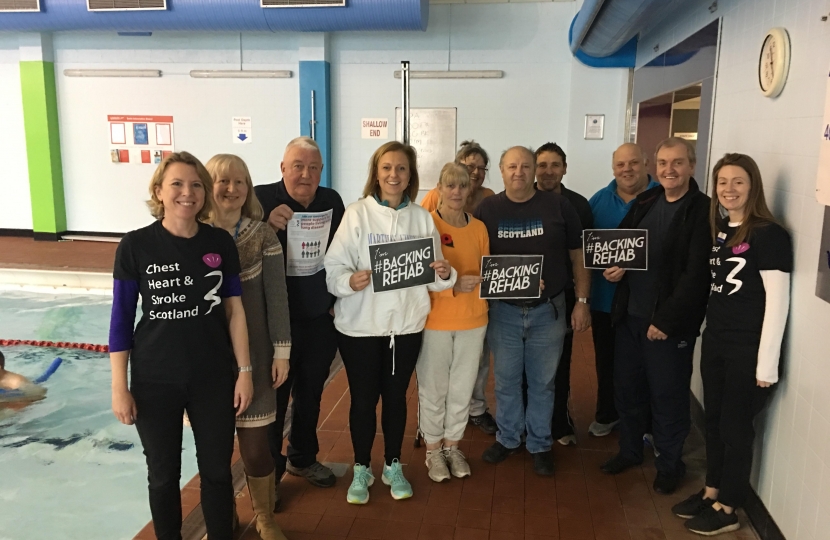 Rachael Hamilton MSP has been informed by NHS Borders and the Minister for Public Health and Sport, Aileen Campbell MSP, that the Scottish Borders can expect pulmonary rehabilitation to come soon.

In a letter to Rachael Hamilton MSP, NHS Borders said it would ‘commence a 3-month test of a pulmonary rehabilitation programme within one locality from January 2018’ so to determine the best approach to deliver the service across the Borders.

Currently the Scottish Borders is the only region in Scotland that does not have Pulmonary Rehabilitation services to help those who suffer from Chronic Obstructive Pulmonary Disease (COPD).

129,000 people diagnosed with COPD in Scotland. In the Scottish Borders there are understood to be 1,500 people who are thought to benefit from the introduction of such support.

Mrs Hamilton wrote to both NHS Borders and the Scottish Government to ask action both would take to reinstate pulmonary rehabilitation.

Earlier in the year Mrs Hamilton met with Chest Heart Stroke Scotland (CHSS) and the Eyemouth support group to talk about the challenges of the illness and lack of absence of services in the Scottish Borders. Rachael also learnt about the CHSS pulmonary rehabilitation campaign and vowed to help in any way she could.

The MSP for Ettrick, Roxburgh and Berwickshire also called for COPD support services to come to the Borders in a debate in Parliament last month that raised awareness of COPD.

Rachael Hamilton MSP said: "I am very pleased that NHS Borders will aim to deliver pulmonary rehabilitation in the Scottish Borders.

"Currently the Scottish Borders is the only region without such services. I am very pleased, as I am sure are the 1,500 who will make use of the service.

"Well done to Kath and the CHSS team for a successful campaign and I am pleased to have helped them with getting this vital service to the Borders."

Kath Byrne, Policy Manager at Chest Heart & Stroke Scotland, said: "This is great news for the many people in the Borders who have been without access to this important treatment for the last 5 years. It’s a treatment which is not only one of the cheapest and most effective available for people with lung disease, but people tell us how it’s helped them get their lives back after a devastating diagnosis. Without Rehab, people can feel trapped in their own homes as they lack the health and the confidence to regain their lives – and they are far more likely to return to hospital or visit their GP.

"For this reason, Chest Heart & Stroke Scotland is campaigning about the importance of Pulmonary Rehab and how vital it is that everyone who needs it can access a programme.

"Scotland has one of the worst rates of lung disease in Europe and unlike heart disease and stroke, it’s not being tackled as a national priority."